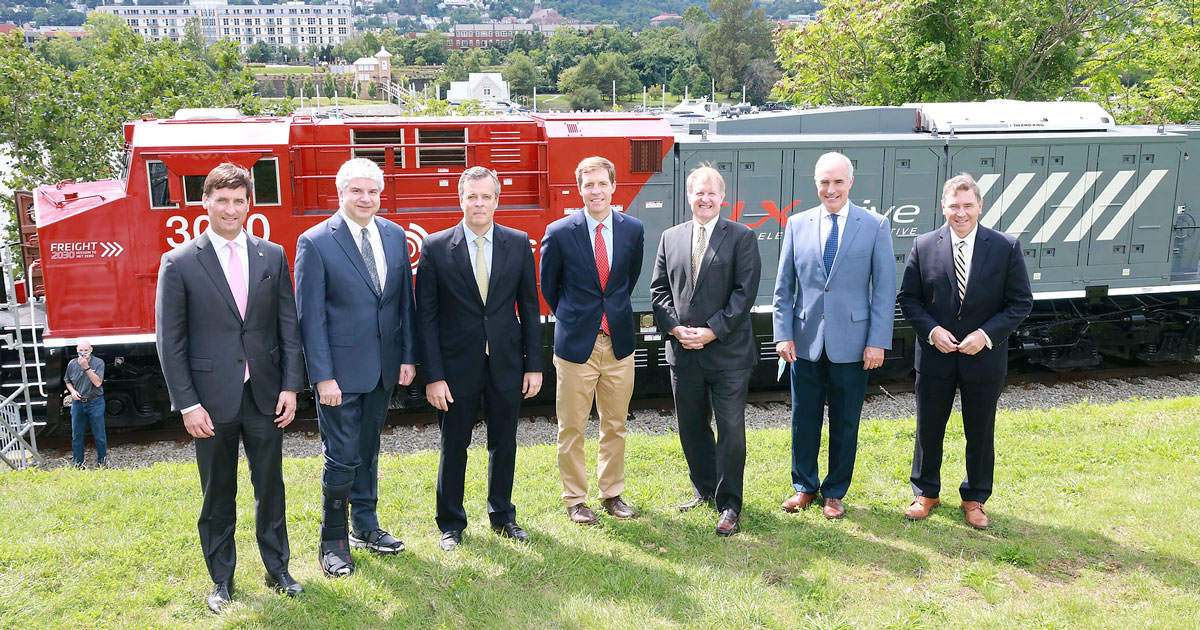 The announcements, which are based on a joint vision of building a more sustainable freight transportation network, were made during a ceremonial gathering on Carnegie Mellon’s campus, attended by U.S. elected officials and Pittsburgh dignitaries. This vision consists of two parts. One consists of powering locomotive fleets with alternative energy sources, such as batteries, and eventually, hydrogen fuel cells for a zero-emissions freight rail network pilot. The second focuses on advancements to current signaling systems and digital technologies to increase rail network capacity, utilization and safety across the U.S.

“Pennsylvania has a long, proud history of railroads and railroad manufacturing. Freight rail is also already a relatively efficient means to move critical supplies around the country. This effort helps tackle the climate crisis by prioritizing electric and clean energy technology,” said U.S. Senator Bob Casey (D-PA). “Transportation and economic development remain among my top priorities for our state. Today’s announcement will place Pittsburgh – one of the leading science and technology hubs in the world – at the center of efforts to address climate change through transportation policy and will also spur significant job growth, reduce greenhouse gas emissions dramatically and allow the U.S. to lead internationally in creating zero-emission solutions for rail.”

To maximize utilization across the nation’s mainline rail network, which is the cleanest, safest and most efficient way to move goods over land, Carnegie Mellon University will play a leading role in developing the engineering technologies that bring together the data, logistics and intelligence needed to optimize rail operations, while reducing emissions.

“The time is right to accelerate the application of emerging technologies to transform the rail industry,” said Farnam Jahanian, President of Carnegie Mellon University. “Advances in digital technologies and artificial intelligence will revolutionize freight rail by driving dramatic improvements in safety and network capacity, while simultaneously increasing efficiency across the nation’s supply chain. As these emerging technologies converge with clean energy breakthroughs, we also see a tremendous opportunity to enable the decarbonization of freight rail. CMU looks forward to bringing our research capabilities and our proven track record of success with industry partners to this important effort.”

G&W’s Buffalo & Pittsburgh Railroad will pilot technologies developed by the Freight Rail Innovation Institute, including a zero-emissions battery and hydrogen-powered train that is planned for revenue operation over 200 miles of track between Pittsburgh and Buffalo, N.Y. within the next three years.

“While already the most environmentally friendly mode of surface transportation, freight railroads have a critical role to play in our nation’s decarbonization strategy,” said Jack Hellmann, CEO of G&W. “Through this partnership, we plan to transform the next generation of freight rail transportation by adopting advanced technologies that can eliminate emissions and increase rail utilization without requiring significant new rail infrastructure. The end result will be a cleaner environment, more competitive transportation for our nation’s industrial producers, and a freight rail system that remains the most efficient in the world.”

Today’s gathering also featured the inaugural display of Wabtec’s FLXdrive, the world’s first heavy-haul battery-electric locomotive. Earlier this year, the FLXdrive demonstrated its capabilities in revenue operations during a three-month pilot in California, covering more than 13,000 miles of track. The FLXdrive, operating at 2.4 megawatt hours, successfully reduced the overall fuel consumption by more than 11 percent across the entire locomotive consist — saving over 6,200 gallons of diesel fuel and reducing approximately 69 tons of CO2 emissions. The second generation of the FLXdrive locomotive, which is in development and will operate at more than 7 megawatt hours, will reduce fuel consumption by up to 30 percent across the train. Looking to the future, Wabtec will accelerate the shift to alternative clean energy solutions, through zero-emission hydrogen-powered locomotives.

“This partnership with Carnegie Mellon University and Genesee & Wyoming further strengthens our efforts to decarbonize global rail transportation and will significantly increase freight rail utilization, efficiency, and safety throughout the rail network,” said Rafael Santana, President and CEO of Wabtec. “The transportation sector is at a critical inflection point. With technologies providing increased battery and hydrogen power capacity, we have the potential to eliminate up to 120 million tons of greenhouse gas emissions per year in North America.”

Wabtec Corporation (NYSE: WAB) is focused on creating transportation solutions that move and improve the world. The company is a leading global provider of equipment, systems, digital solutions and value-added services for the freight and transit rail industries, as well as the mining, marine and industrial markets. Wabtec has been a leader in the rail industry for over 150 years and has a vision to achieve a zero-emission rail system in the U.S. and worldwide. For more information, visit Wabtec at: www.WabtecCorp.com.

Carnegie Mellon University, cmu.edu, is a private, internationally ranked research university with programs in areas ranging from science, technology and business, to public policy, the humanities and the arts. More than 14,000 students in the university's seven schools and colleges benefit from a small student-to-faculty ratio and an education characterized by its focus on creating and implementing solutions for real problems, interdisciplinary collaboration and innovation.