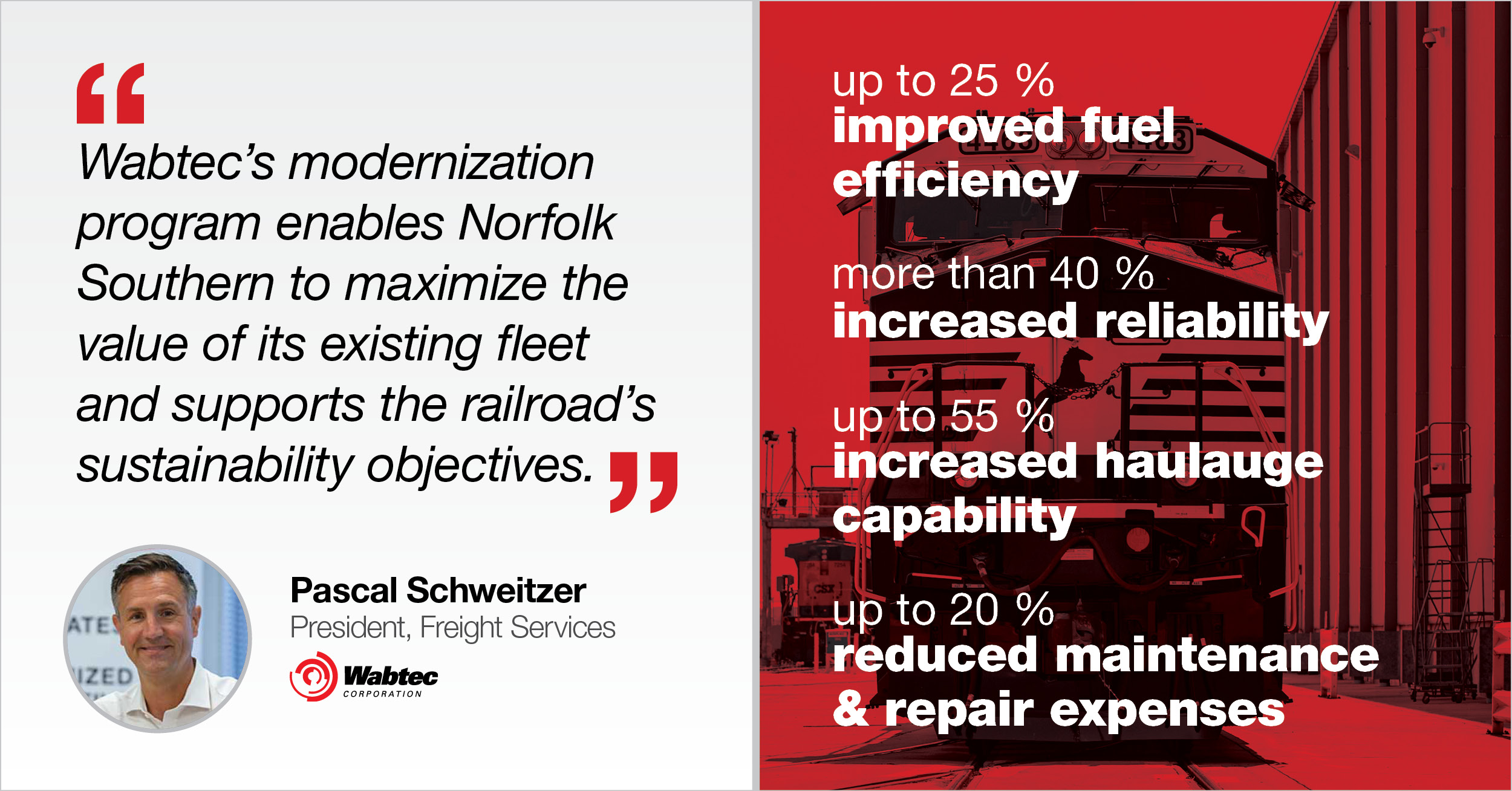 ATLANTA and PITTSBURGH, (March 23, 2022) — Wabtec Corporation (NYSE: WAB) announced today an additional multi-year order from Norfolk Southern (NYSE: NSC) to modernize 330 locomotives as part of its continued partnership. This deal is part of Norfolk Southern’s ongoing efforts to further improve fuel efficiency and reduce emissions from its fleet. With each modernized locomotive, Norfolk Southern’s carbon emissions are reduced by more than 500 tons per year. The deal marks the third major modernization order from the railroad since 2015, making it the largest modernized fleet in North America, with more than 950 locomotives upon completion in 2025.

“Modernizing locomotives in our fleet will improve operational performance and reliability,” said Tom Schnautz, Vice President Advanced Train Control for Norfolk Southern. “Importantly, it will also help us achieve our science-based target of a 42% reduction in emissions intensity by 2034. Wabtec’s proven modernization program allows us to maximize the value of our locomotives, minimize the use of new materials, and reduce the environmental impact of our operations.”

Wabtec will modernize D9-44CW locomotives that are more than 20 years old and transform them into AC44C6Ms, which will add another 20 years of incremental life to each locomotive. The modernized locomotives will feature the FDL Advantage engine upgrade and a suite of digital solutions including Trip Optimizer, SmartHPT, and Distributed Power. The modernizations will yield significant dividends per locomotive, including fuel efficiency improved by as much as 25%; a more than 40% increase in reliability; haulage ability increased by up to 55%; and a reduction of maintenance, repair, and overhaul expenses by 20%.

“Wabtec has developed a portfolio of modular technologies for a variety of retrofit solutions for middle-aged locomotives. This has been done in a strategic way, analyzing the fleet and needs of our customers. Our modernization program allows Norfolk Southern to enhance its existing fleet by bringing the aging locomotives’ performance to the latest standards,” said Pascal Schweitzer, President of Wabtec Freight Services. “By customizing these modernizations for Norfolk Southern and installing state-of-the-art technology, we are helping the railroad realize outcomes including increased tractive effort, fuel efficiency, reliability and adhesion, which reduce maintenance costs.”

Wabtec’s modernization program is a key component of Wabtec’s sustainability efforts. It updates aging locomotives with customized solutions that range from simple changes like control system upgrades to complex restorations, such as the comprehensive transformation of an aged DC locomotive into an AC locomotive outfitted with state-of-the-art digital technology.

To date, Wabtec has delivered more than 1,100 modernized locomotives in the Americas. The fuel efficiency benefits of these locomotives have reduced carbon emissions by more than 1.4 million tons since 2015. That reduction is the equivalent of removing the emissions from 340,000 cars.

Wabtec Corporation (NYSE: WAB) is focused on creating transportation solutions that move and improve the world. The company is a leading global provider of equipment, systems, digital solutions and value-added services for the freight and transit rail industries, as well as the mining, marine and industrial markets. Wabtec has been a leader in the rail industry for over 150 years and has a vision to achieve a zero-emission rail system in the U.S. and worldwide. The company has approximately 27,000 employees located at facilities in 50 countries throughout the world. Visit Wabtec’s website at: www.wabteccorp.com.

Norfolk Southern Corporation  (NYSE: NSC) is one of the nation’s premier transportation companies, moving the goods and materials that drive the U.S. economy. Norfolk Southern connects customers to markets and communities to economic opportunity, with safe, reliable, and sustainable shipping solutions. The company’s service area includes 22 states and the District of Columbia, every major container port in the eastern United States, and a majority of the U.S. population and manufacturing base. More information on the company’s sustainability strategy can be found here: http://www.norfolksouthern.com/betterplanet.