Everyone expects and wants greater efficiency in rail transportation, but due to urban concentration and a lack of funding, it seems very unlikely that the infrastructure will be expanded. The only way to improve rail transportation performance is therefore by running more trains per hour on existing tracks. To do this, we need to overcome the challenge of braking performance limitations due to adhesion between wheels and rails.

The Wheel Slide Protection (WSP) system is the key to optimizing the use of available adhesion, thereby improving guaranteed braking performance.

In normal situations, performances are physically limited by the adhesion between the rail and the wheel, but external issues such as weather conditions and pollution can cause a reduction in the actual available adhesion. The first consequence of this is an alteration in performance, but it can also lead to costly deterioration. The main function of a WSP is to make best use of available adhesion in any external conditions, while avoiding the worse-case scenario of axle locking. It is also used to limit deterioration that could impact either rolling stock or infrastructure.

The following paper introduces Wabtec’s most recent achievements in this area, the result of continuous work both in the lab using high-performance simulation and test tools, and in the field.

Current WSP systems are designed by considering typical degraded adhesion conditions as defined within standards, which sometimes deviate significantly from actual conditions. If adhesion is below this standard level, it can lead to the extension of braking distances by more than 50% compared to dry rail, and to the deterioration of wheels (wheel flats), obliging operators to reprofile them. This process reduces train availability and shortens wheel lifetime, generating additional maintenance costs. If adhesion is degraded even further, restrictive operational rules have to be considered, such as reducing permitted speeds or managing rail cleaning.

The WSP systems currently in use are qualified and tested on the basis of the adhesion models defined in the EN15595 standard (or UIC 541-05). It is a long and expensive process achieved first through test benches, then in field tests; the process takes several weeks for each new vehicle implementation.

A fixed setting cannot cover the wide range of conditions created by environmental conditions or the brake system itself:

In 2014, as part of the European Shift2Rail project, the railway industry - manufacturers and operators - decided to work on this problem, and Wabtec responded to the Shift2Rail challenge (PINTA1 and PINTA2 projects).

The first step was to gain a better understanding of the degradation of wheel-rail adhesion in real use conditions and environments, in particular the "cleaning" effect that can appear along the train while in service due to the successive passage of the wheels. This was achieved thanks to careful analysis of numerous test results, and extensive work on a dedicated test bench.

This test bench, known as Roller, was developed to simulate accurately the action of contaminants that degrade adhesion between each wheel and the rail. It is a unique tool developed by Wabtec. This test bench is a reduced-scale device that enables testers to apply braking on several axles running on the same track. Degraded adhesion is created for the track, and at each axle it is possible to modulate brake effort and assess the resulting adhesion. 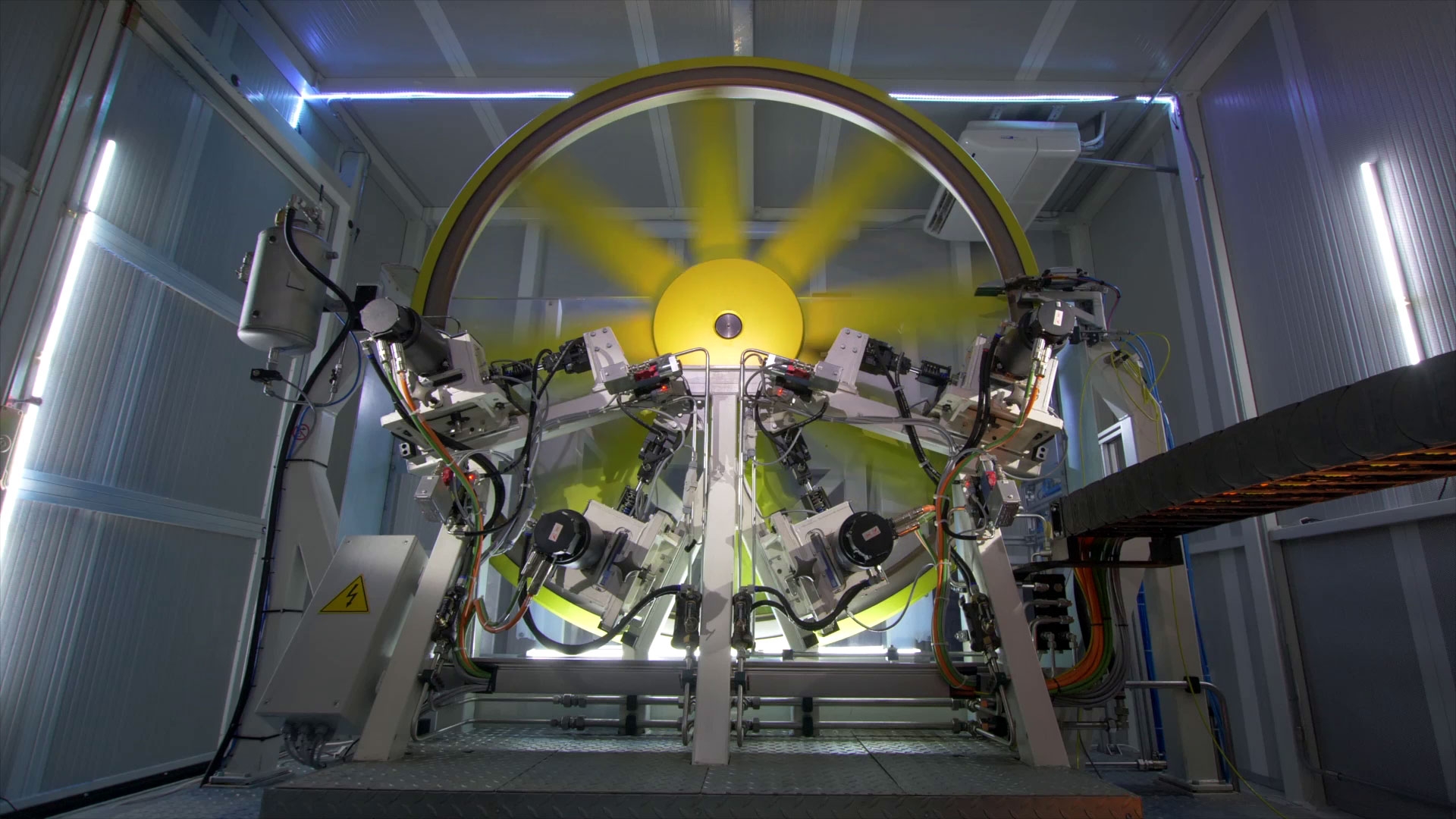 On this basis, a new Adaptive WSP system was designed and implemented. For each vehicle, digital electronic equipment, combined with a set of sensors and actuators, integrates software based on an adaptive algorithm that uses the least mean squares method (LMS). It includes dynamic self-adjustment of the WSP algorithm taking into account real adhesion conditions.

Outside of Wabtec’s lab, this new system has been tested on the WSPER test bench in the UK, on DBST’s EN15595-accredited test bench, and during field tests with an EuskoTren vehicle in Bilbao, Spain.

Examination of the impact of the DistanceMaster™ Adaptive WSP device on braking distances, an essential safety parameter, shows a significant improvement compared to standard WSP systems compliant with EN15595:2011 and 2018. With Adaptive WSP, we observed an improvement in the extension of stopping distance in standard EN/UIC bad adhesion conditions. In comparison with stopping distances in dry conditions, the extension is approximately 8%, compared to 12% with the previous generation of Wabtec WSP, and an acceptable maximum of 20% specified by the standards.

An assessment has been made on the WSPER test bench; this WSP evaluation rig was developed by DB-ESG part of DB System Technik, in Derby, UK. 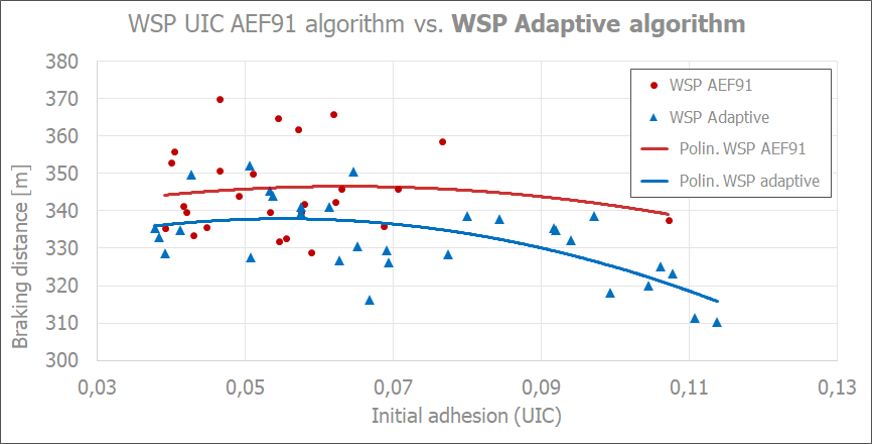 [Comparison of braking distances at 90km/h of the Adaptive WSP vs. previous-generation WSP]

In addition, compressed air consumption (and hence the energy consumption required to maintain mainline pressure) is significantly reduced compared to previous-generation WSPs during all tests using the optimized adaptive algorithm.

[Comparison of air consumption of the adaptive WSP vs. previous-generation WSP in sustained low adhesion conditions.]

Another assessment was made on DBST’s EN-accredited test bench located in Minden, Germany.

During validation of the A-WSP on DBST’s test bench, the algorithm was subjected to more than 1,000 tests, including functional and types tests using various adhesion profiles and braking regimes.

Validation was performed on a trailer car with a maximum speed of 400 km/h.

The next step required to improve this even further is to take into account the variation in adhesion when successive axles pass through; to this end, a deceleration compensation system was designed and implemented. This system (available in the integrated brake control systems of the Metroflexx and Regioflexx types developed by Wabtec) aims to reduce further the braking distance in conditions of degraded adhesion thanks to better use of adhesion available along the train.

The system aims to redistribute the braking effort along the train to achieve target deceleration at train level. Each local brake control unit checks available adhesion and can increase the braking effort up to the limit, while ensuring maximum passenger comfort. This deceleration compensation function can be used even in emergency braking due to the high level of safety (SIL4) present in Wabtec's Metroflexx and Regioflexx brake systems (brake systems for metros and multiple-unit trains respectively).

This function is managed locally (by the brake control equipment of each bogie or vehicle) and does not require communication between the train’s different brake control units. When the operator chooses to implement it, this function is fully configurable (maximum adhesion required, maximum brake cylinder pressure, etc.).

A Decisive Step Forward for Adaptive WSP and Deceleration Compensation

The use of these two functions working together has been tested by DB-ESG on the WSPER test bench with the following results (considering the reference case of the Euskotren).

The Deceleration Compensation, working in conjunction with the Adaptive WSP system described above, reduces extension of the braking distance, under the reference degraded adhesion conditions, to about 6% above the dry-condition braking distance. Compared to the intervention of a WSP system acting alone, the combination of the two systems allows a 50% improvement [6% extension instead of 12%] in braking performance in degraded adhesion conditions. This constitutes a major improvement in safety, particularly by taking better account of the variability of rail-wheel adhesion conditions.

The relative advantages of these two innovative systems are summarized in the following chart.

This is a significant improvement in control of the guaranteed emergency brake rate, one of the major criteria for the safety of rail transport systems.

Implementation of These Systems

An Adaptive WSP unit has been tested in service for one year by Amtrak on the North American market with noticeable benefits in terms of wheel wear. Adaptive WSP and the deceleration compensation are set to equip full trains for four season tests for NYCT (NewYork) and Euskotren (Bilbao) operators; these initiatives will begin service in Q4 2021 and Q1 2022.

Adaptive WSP is currently undergoing EN certifications. Combining it with the deceleration compensation system can be considered for the design of new rolling stocks. This complete system will be available to operators wishing to improve the efficiency of their fleet.

It should be noted that the implementation of Adaptive WSP alone is also possible, with no need for heavy hardware changes, on existing vehicles already equipped with Wabtec WSP.

While there are still steps to be taken to reduce train headway, such as the deployment of variable block signaling systems and adequate guaranteed emergency brake rate (GEBR), both of which contribute to  the complete rail system design, Wabtec’s innovative adhesion package described above provides very solid building blocks and overcomes a major technological challenge.